OMA NY: Search Term is the first monograph produced by the Office for Metropolitan Architecture (OMA) since Content came out in 2004. Focused, as the title indicates, on OMA's New York studio, Search Term uses thousands of images — 5,565 of them, to be precise — to tell the stories behind nearly two-dozen projects.

OMA New York is headed by partners Shohei Shigematsu and Jason Long, who recently spoke at the Rizzoli Bookstore in New York City to mark the release of OMA NY: Search Term, published by Rizzoli. They started the presentation to the overfilled room with a quick slideshow of some OMA NY projects that were shelved, did not win competitions, or for other various reasons were not realized. One project stood out from the rest: 23 East 22nd Street, a 24-story residential tower that was designed in the booming 2000s but then fell victim to the 2008 financial crisis. It stood out because it was the only project among all the unsuccessful projects flashing by on the screen that is one of the 23 projects in Search Term;  the rest are completed or are in various stages of design on their way to realization. The inclusion of 23 East 23rd Street signals its importance: designed by Rem Koolhaas and Shigematsu, the project marks a transition from Koolhaas's "Delirious New York" to New York City as the home of one of OMA's branch offices, where partners are free to experiment and make names for themselves. Search Term presents the results of the New York office under Shigematsu and Long over the last decade and a half, and below is a visual tour through the highly visual book.

Covered in a metallic linen paperback and wrapped in clear plastic printed with the table of contents, the outside of the book subtly hints at its interior: 23 projects documented through thousands of images, where projects are found by image numbers rather than page numbers. (Photo: Spec_Ops.NYC, courtesy of OMA New York)

OMA New York's promotional images show the book in their cluttered and crowded office, a setting that defines the aura of OMA (think of the photos that start S,M,L,XL) as much as the blue-foam models and formal innovation of their designs. (Photo: Spec_Ops.NYC, courtesy of OMA New York)

The book in the previous photo is open to Faena District, which opened in Miami Beach in 2016. This image, #2253 in the book, describes how the same project's "two volumes can work together to form a symbiotic relationship." (Photo © OMA)

Image #24: "The box, modern architecture's typology par excellence, typically stands in isolation. In Milstein Hall, it acts as a connector, transforming an ad hoc cluster of buildings into a continuous space with the scale to facilitate collaboration." (Photo © OMA)

The photo at the top of the article — the selfie backdrop from the Rizzoli event — illustrates the rhythm of the book, in which each project starts with some full-bleed photos and is followed by hundreds of thumbnail images. (Photo: Spec_Ops.NYC, courtesy of OMA New York)

The storytelling throughout the book is visual, told through captions accompanying the many small images that fill the pages; reading the captions in the numbered order of the images reveals the process behind the research, design, and realization of the projects. (Photo: Spec_Ops.NYC, courtesy of OMA New York)

The study models for 23 East 22nd Street were exhibited at the Center for Architecture in 2009. (Photo © OMA)

A term such as Stress, for instance, shows engineering diagrams illustrating how gravity affects cantilevered forms, but also the stress of building models, presenting to clients, and other aspects of working at OMA New York. (Photo: Spec_Ops.NYC, courtesy of OMA New York) 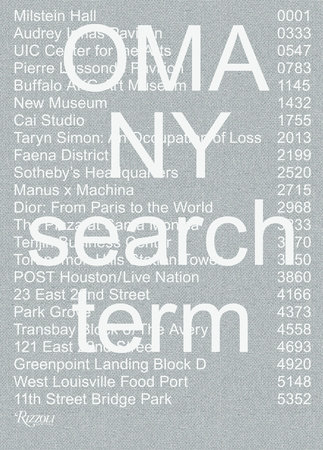 Other articles in this category

A Mirrored McDonald's in Moscow

A Pearl on the Grass

A Dozen Buildings Opening in 2022

BIG's Copenhill Is World Building of the Year